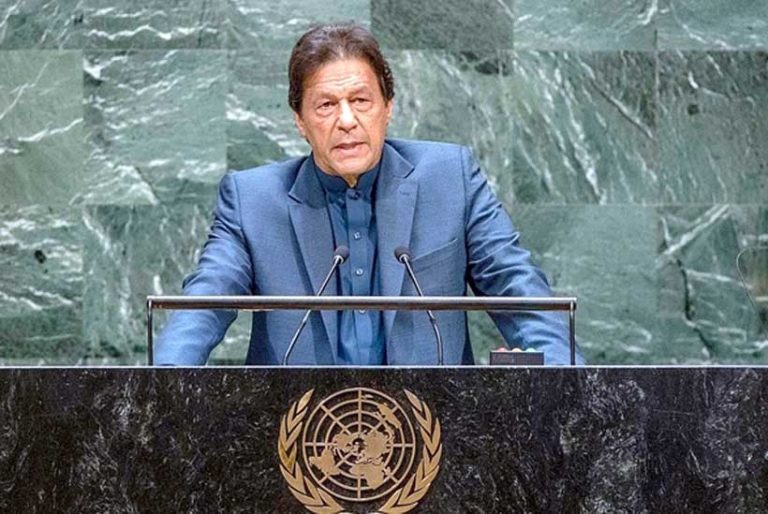 ISLAMABAD: Prime Minister Imran Khan will virtually address the United Nations General Assembly’s 76th session on September 24. In the session, he will focus on the developing situation in Afghanistan and Kashmir issue.

The UNGA theme is “Building resilience through hope – to recover from COVID-19, rebuild sustainability, respond to the needs of the planet, respect the rights of people, and revitalize the United Nations”.

Pakistan’s Ambassador to the UN, Munir Akram said, “We will participate actively in the General Assembly session.” He said this while explaining the policy of Islamabad.

He said that the world confronts many challenges. For example, COVID-19 pandemic, its devastating impact on the economies of developing countries and ever growing threat of climate change. He said these threats coincide with rising tensions between the great powers, particularly the US and China. And also with a new arms race, and persisting and proliferating conflicts in the Middle East, Africa, South Asia and other regions of the world.


“The discussions in General Assembly’s will cover global issues as per expectations. And on certain conflict situations,” the Pakistan envoy said.

Akram said Pakistan’s policy statement will convey Islamabad’s views on the major global economic and political issues. As well as on the grave situation in Indian occupied Jammu and Kashmir and on the fast evolving situation in Afghanistan.

Throughout the session, he said, Pakistan will draw the world‘s attention to the human rights violations in Indian occupied Kashmir.

The imperative will be to stabilize Afghanistan, the need to combat Islamophobia and counter disinformation, such as that being propagated by India, as well as to address the economic challenges confronting developing countries.

Foreign Minister Shah Mahmood Qureshi will participate in several events during the assembly’s high-level week. It will include a meeting of the OIC Working Group on Jammu and Kashmir. Along with a Ministerial meeting of the Uniting for Consensus group on Security Council reform. And a high level meeting on Energy.

The foreign minister will also hold a number of bilateral meetings with his counterparts, meet the UNSG, address think tanks and meet members of the Pakistani community and businessmen in New York besides the Pakistani and international media.

Afghanistan, climate change and the coronavirus crises will be the key issues for discussion. The UN General Assembly’s hybrid high-level debate will start on Tuesday.

Earlier, US requested that member states send pre-recorded messages to curb the spread of the coronavirus. 83 heads of state, 43 prime ministers, three deputy prime ministers and 23 foreign ministers will address the General Assembly in person.

On September 25, Indian Prime Minister Narendra Modi is set to speak as per the schedule. It is a day after he participates in the Quad Leaders’ Summit in Washington DC. President Biden will host the summit.