Dr Jackal or Mr Hyde: The real Dr Qadri stand up and raise your hand?

The more I see and hear him every day, the more I get confused with his real personality and character. Though, he swears and professes that he is honest and sincere in his intentions but his association with corrupt, malign embezzlers, crooks, liars, criminals, target killers and bhatta khoors is enough to call him Dr Tahir, the pakistani, Jackal and Mr Hyde.

Now, that he has entered into Pakistani politics and surrounded by criminals, crooks, corrupt politicians and individuals, thieves and robbers, his real character will soon mirror in the sky.

If he is against this corrupt and perfidious Pakistani political system, he should have invited Imran Khan to join his platform the first day he arrived in Pakistan. As a matter of fact, he is standing on the same platform that was erected by IK and PTI and Dr Qadri has conveniently stolen from him and claiming its ownership. It is in legal terms called deception and libel for prosecution.

How could Dr Qadri stand on the same platform with killers, murderers and bhatta khoor? Is he gone deaf, blind and dumb since he arrived in Pakistan? Power can corrupt!
Advertisement

I have a firm believe one who swears a lot, is a fishy person.
Remember Zulfiqar Mirza swering on Holy Quran, though he seems to be telling the real picture but his style was wrong and Altaf Hussein also swearing on Holy Quran like a eunch and making horrible gestures.
There are many questions to be asked by TUQ like, his timing, allaince with Altaf and Chaudhrys, his doubtful past, chanda collection style, questionable religous speeches, Canadian nationality, declaration of assets and last but not the least what does he actually demands?

Dr.Tahir ul Qadri invited all Pakistan parties informal and formally.............PTI did not even bother to attend December 23rd and did not send their friendly delegation to attend the event...........still he is requesting and inviting all parties including PTI..............fault is at PTI side not TUQ

As expected, Establishment’s favorite stooge is now best friends with Establishment’s latest stooge. The Altaf – Qadri or AL-Qadri alliance, is gearing up for putting up a show on the eve of the 14[SUP]th[/SUP] January in Islamabad. This would be the first time that a political party that has been in government for over 10 years is going to… wait for it… protest against an election system which it is a part of and has used to enjoy 10 years of government.

So looking at this marriage of convenience (Where ‘convenience’ means ‘Establishment’s Orders’) one is inclined to ask a few questions to the Al – Qadri Aliiance.

1. If the election system is so wrong and is so grossly flawed, then why has the MQM been a part of it so long? Also was MQM so not smart that it took Tahir-ul-Qadri’s Lahore Show to make them realize that the election system is not the way it is supposed to be.
2. Given that Tahir-ul-Qadri does not want to run for elections and neither does his party, then what is the fuss about? I mean think about it, this is a person who does not want to run for elections but wants to change the electoral system which has been agreed upon by all parties sitting in parliament through the 20[SUP]th[/SUP] Amendment. If he was so serious about it, then where was he when consultations for this were taking place with smaller parties?
3. What exactly are the changes that the AL-QADRI alliance wants to see with regards to the electoral system. I mean it is totally cool that they can gather people and put up a show every other week, but what specifically do they want to do. Also haven’t both of them read the 20[SUP]th[/SUP] amendment that details the process for caretaker set ups to which MQM actually agreed to?
4. How is holding a city hostage and asking for constitutional changes without actually going to the parliament, constitutional?
5. And lastly, is AL-QADRI believes in democracy as he has stated in multiple interview, then why doesn’t he contest elections instead of trying to get in to a care taker set up. Also has he not learned anything from his years on the political fringe? Has not learned how he is always the pawn who is discarded as soon as the job gets done?

It is imperative that these questions are asked of these two allies or front men as that is what they are. People of Pakistan deserve to know these truths.
Last edited: Jan 2, 2013
A

PTI was invited but no response. It's their own fault. Instead of MQM it could have been PTI. It would have been a powerful force for change. No response from PTI so who's fault is that?
W

I guess Qadri is better off without IK. Qadri is here to achieve some hidden goals and IK is no use to him. Interestingly I heard on TV programe that as per our constitution any dual national party head is barred from taking part in active politics. I guess Qadri must be thinking of surrenderig canadian nationality then.

ChangePakistan said:
Dr.Tahir ul Qadri invited all Pakistan parties informal and formally.............PTI did not even bother to attend December 23rd and did not send their friendly delegation to attend the event...........still he is requesting and inviting all parties including PTI..............fault is at PTI side not TUQ
Click to expand... 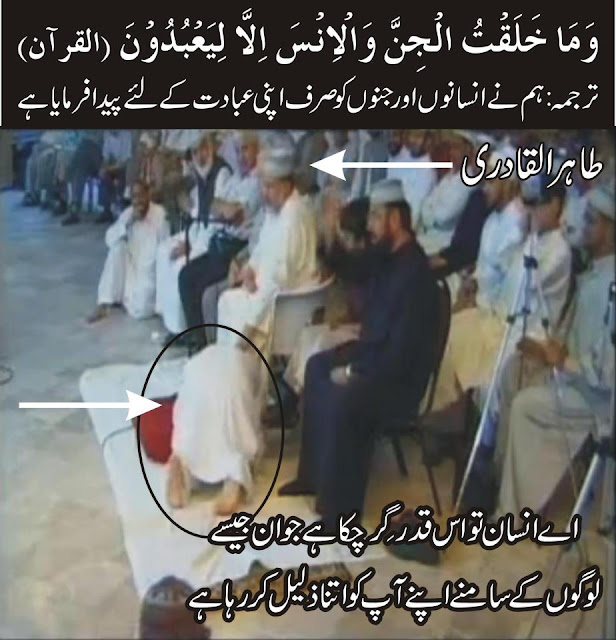