I’m sure opposition will blame gov for this

Smaller suppliers face ruin as price hikes have made their price promises to customers undeliverable.

The UK's sixth largest energy company, Bulb, is seeking a bailout, while four smaller firms are expected to go bust.

At the beginning of 2021 there were 70 energy suppliers in the UK, but industry sources have said there may be as few as 10 left by the end of the year.

Four small energy companies have ceased trading in recent weeks, including Edinburgh-based People's Energy, which supplied gas and electricity to about 350,000 homes and 1,000 businesses, and Dorset-based Utility Point which had 220,000 customers.

Recent price hikes have left some companies unable to provide their customers with the energy they have paid for.
Industry group Oil & Gas UK said wholesale prices for gas had increased by 250% since January - with a 70% rise since August.
If a supplier fails, energy regulator Ofgem will make sure affected households continue to be supplied, and will not lose money owed to them.
A new energy supplier would be responsible for taking on any credit balances a customer may have.
But the process for dealing with failing firms has come under pressure as adopting customers is less attractive for surviving companies due to spiralling wholesale prices.
The state-backed loans may be offered to encourage firms to take on customers, although Foreign Office minister James Cleverly told BBC Breakfast on Monday that "ideally" businesses should stay afloat "through their own efforts."

Prime Minister Boris Johnson, who is in New York for a UN General Assembly meeting, said the problem was "temporary".
He said that he was "very confident" in the UK's supply chains and that market forces should be "very, very swift" in fixing the issues but that government would help where it could. 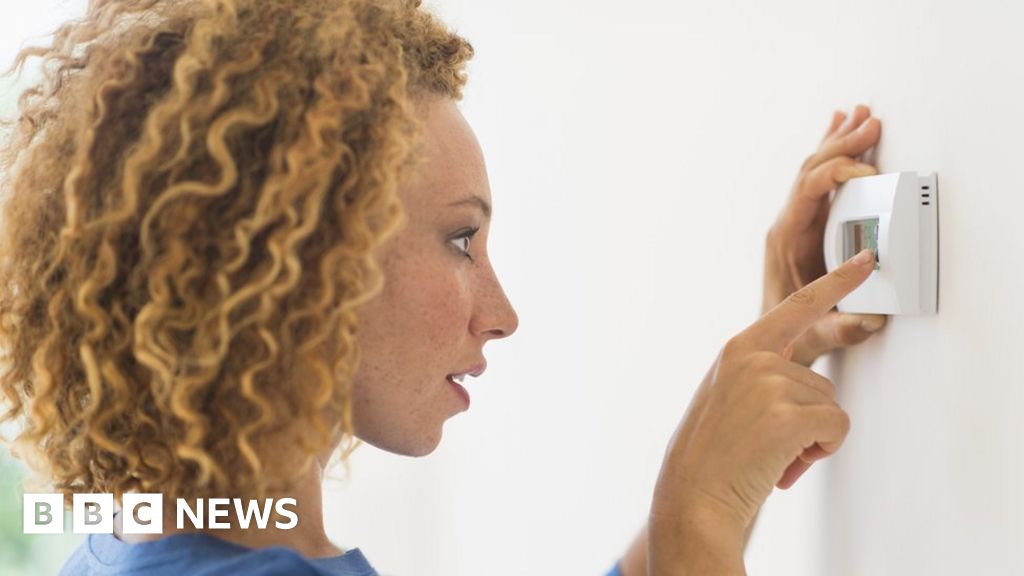 The business secretary is holding crisis talks as firms battle to stay afloat amid a surge in gas prices.
www.bbc.co.uk 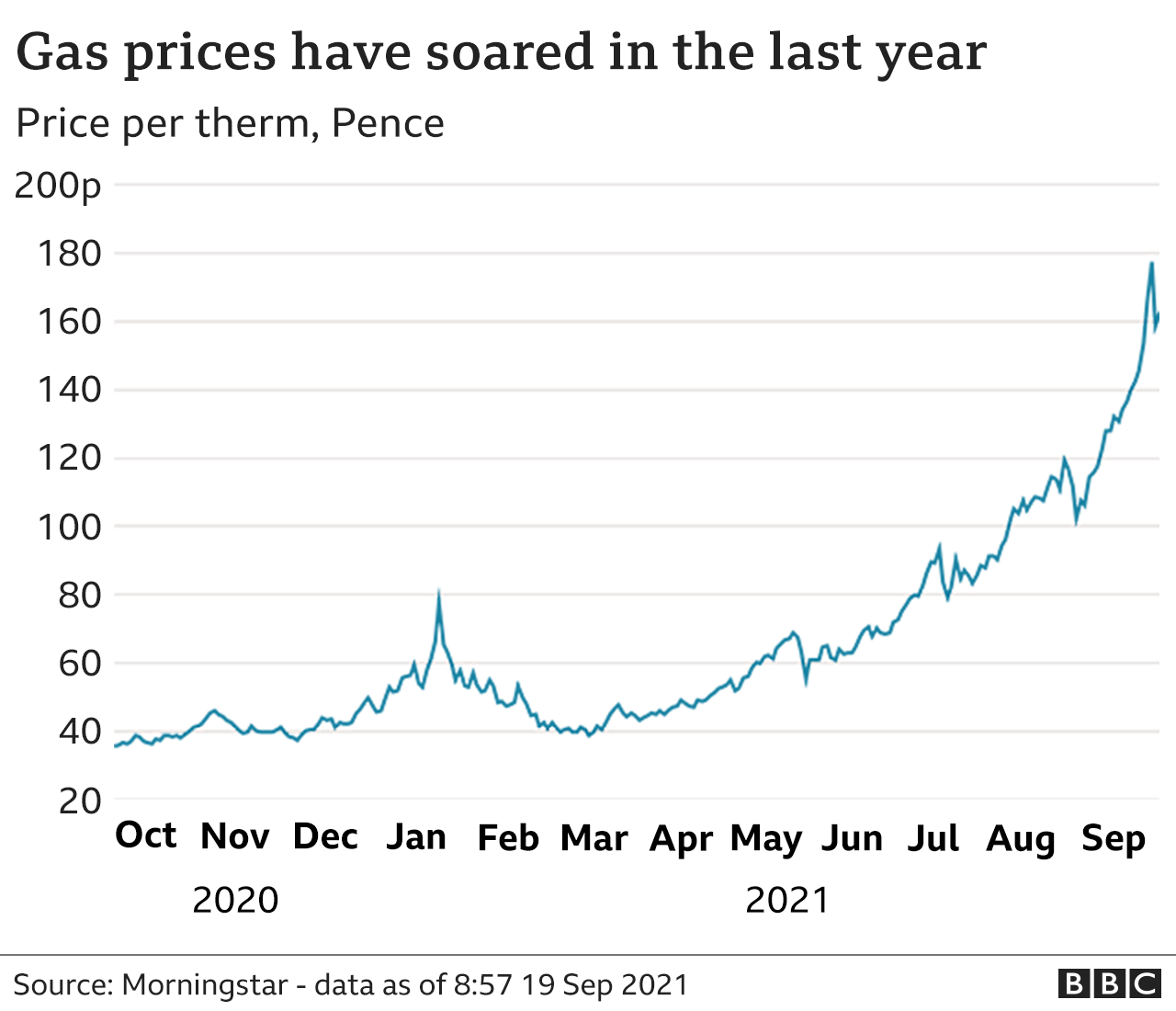 Increased demand, particularly from countries in Asia which also experienced cold weather, has added to the pressure on prices.

Nick Butler, visiting professor and chair of The Policy Institute at King's College London, told the BBC's Today programme that a reduction in supply from the United States, Russia and the North Sea was also playing a part, as well as limited storage facilities for gas in the UK.

"The government has taken their eye off the issue of energy security," he said. "All of the focus in Whitehall has been on climate change. For the moment, we're very reliant on oil and gas and when gas gets short in the world market, it hits back here."

One senior executive at one of the UK's largest energy companies described an estimate that 10 energy companies would survive as "optimistic".
The proliferation of new energy retailers, set up to challenge the bigger players, had been considered by past and present governments as a triumph of healthy competition.
The bigger energy providers have the financial resources to take out insurance - or hedge - against the risk of a spike in energy prices. Smaller players have been unable or unwilling to spend the money to guard against a price shock.
Industry sources have told the BBC that the insuring positions or "hedges" - the right to buy energy at historic fixed prices - taken out by the bigger players, are now worth as much or more than the big companies themselves.
Senior executives at some of the largest companies said the energy price cap - supported by both Labour and Conservative politicians - had played a part in bringing about the current crisis.
"You can legislate to protect the consumer - but that can bankrupt the supplier," said one senior industry source.
"The price cap is now the cheapest deal in the market and providing new customers with energy at that price is loss-making."
There have been calls to remove levies on customers' energy bills intended to fund green initiatives. However, the BBC understands these will be maintained as the sums involved would not significantly address the scale of the current problem.
A reduction or removal would send "the wrong signal", three months before a landmark climate change conference, known as COP 26, which the UK is hosting in Glasgow in November.
The business secretary has been in intensive talks with energy providers over the weekend and will chair an industry meeting on Monday to explore solutions to the crisis.
It is understood that Mr Kwarteng is "reluctant" to bail out smaller companies but is concerned consumers may end up on more expensive tariffs when they are switched to a new supplier.
The government is also identifying sectors and companies that are vulnerable to higher gas prices
Energy intensive fertiliser producers have shut down which has created a shortage of the by-product of production, carbon dioxide - widely used in the production and storage of food products.
Iceland's managing director Richard Walker told the BBC on Monday that the carbon dioxide shortage must be prioritised to limit any potential disruption for supermarket supplies, which are also being affected due to a shortage in HGV drivers.
Advertisement

surfer said:
I’m sure opposition will blame gov for this

The business secretary is holding crisis talks as firms battle to stay afloat amid a surge in gas prices.
www.bbc.co.uk
Click to expand...

Doing Overtime by posting other countries news will not pay as PTI minster are not getting enough funds to support them self and leave alone Chaprsi stuff.
M

Desprado said:
Doing Overtime by posting other countries news will not pay as PTI minster are not getting enough funds to support them self and leave alone Chaprsi stuff.
Click to expand...

It’s not doing overtime but doing the right thing, so people like come to your senses, which you never will.

but this is happening in Britain, the 5th biggest economy in the world, where two individuals have wealth more than the GDP of our country.

comodities shortages is a global phenomenon now, it should not be used as leverage for thieves that robbed the country and ran away.

Desprado said:
Doing Overtime by posting other countries news will not pay as PTI minster are not getting enough funds to support them self and leave alone Chaprsi stuff.
Click to expand...

Context matters. We live in a global economy. All sensible people understand this
D

surfer said:
Context matters. We live in a global economy. All sensible people understand this
Click to expand...

Muzammil Aslam tried to become a SPAM but since Friday he crying for CAD and hike in interest rate. Blindness leads to accidents.

Desprado said:
Muzammil Aslam tried to become a SPAM but since Friday he crying for CAD and hike in interest rate. Blindness leads to accidents.
Click to expand...

Luxury items imports certainly need to be curtailed. But when global wholesale gas prices are rocketing, it will certainly affect CAD/import bills for any country importing gas.

Energy Bills have already started going up in UK/Europe
O

Oppostion Is Mafia said:
Prices are going up in the world but in Pakistan lot of propoganda
Click to expand...

That is good news so all mafias have been exposed, Judiciary and NAB not catching criminals so at least tax them high get some money back. when they import or but cars get them. Thank you Patwari Bhai for giving good news first time in your life. Why Nawaz Sharif lied to nation and made fake medical reports?