A number of charities supply oxygen cylinders, PPE kits and ambulance services, while some volunteers assist with burials on behalf of victims' families.​

Bashir Ahmad, a 55-year-old resident of Srinagar’s Batamaloo area in Indian-administered Kashmir, was tested for Covid-19 in the second week of April. Three days later, his condition deteriorated when his blood oxygen levels dipped to 75.

He was rushed to a Srinagar hospital where he was admitted and remained on oxygen for a week. Before discharging him, doctors told his family to arrange an oxygen concentrator so his oxygen saturation level is maintained at home.

His son Khalid Ahmad went to various markets to purchase an oxygen cylinder but could not find one. Feeling helpless, Khalid came to hear through one of his relatives about an NGO called SRO Kashmir, which helps patients with oxygen supply.

“I called their helpline number and later received an oxygen concentrator from their office. My father’s condition has now improved and his oxygen saturation is also maintained. The NGO has been a saviour for my father,” he said with a sigh of relief.

A number of NGOs and volunteers have been an oasis of hope for people in restive Kashmir, going into overdrive to help mitigate the suffering of the poor and needy during the pandemic. 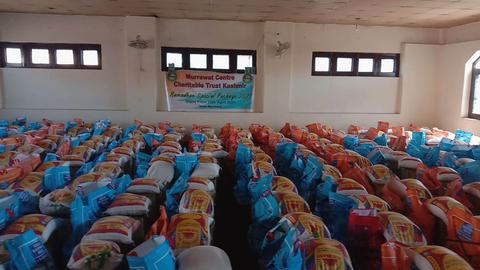 A number of charities supply oxygen cylinders, PPE kits and ambulance services, while some volunteers assist with burials on behalf of victims' families.