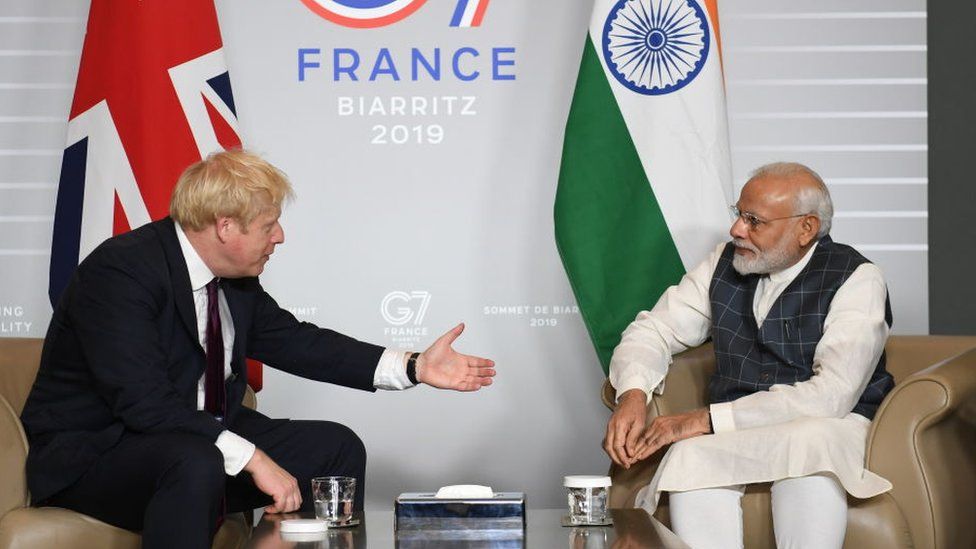 The prime minister has announced new trade and investment deals with India worth £1bn.

It includes more than £533m of new investment from India into the UK, which is expected to create about 6,000 jobs.

The deal, announced ahead of a virtual meeting with India's Prime Minister Narendra Modi, includes a £240m investment by the Serum Institute of India, which will support clinical trials, research and possibly the manufacturing of vaccines.

Serum has already started phase one trials in the UK of a one-dose nasal vaccine for coronavirus, in partnership with Codagenix.

Indian investment deals will create 1,000 new UK jobs each at health and tech firms Infosys, HCL Technologies and Mphasis.Some 667 UK jobs will be created at Q-Rich Creations, 500 jobs at Wipro and 465 at 12 Agro.

"Each and every one of the more than 6,500 jobs we have announced today will help families and communities build back from coronavirus and boost the British and Indian economies," said Mr Johnson.

In recent years, the UK has sold more to Belgium or Sweden than India. But the government hopes that closer ties with one of the most populous and fastest-growing major economies could have huge long-term potential - especially as tensions with China mount.

It believes that this announcement, which boosts access to India for producers of British fruit and medical devices - and means investment in the UK from India's vaccine producers - is just a taste of what could be achieved.

But economists warn that getting a full deal with Delhi that lowers tariff and non-tariff barriers won't be easy. India is likely, for example, to want UK entry visa requirements for its workers and students to be eased.

Attempts by the European Union, Australia and New Zealand to strike free trade deals with India have all stalled.
But as that nation grapples with the economic damage caused by the pandemic and the rising threat from China, it may now take a more pragmatic approach to brokering an agreement.

Why can't Pakistan do this type of thing? If we had a proper economical team then I am sure they inshallah could do wonders and smack India off the map economically.

India is a big country and has more to offer the world. Pakistan is a smaller country and all it can offer the world is a corrupt people who are Muslims in name only. Recently our highest judiciary showed the world how corrupt and fallen from morals a judge can become. We start by giving azaan in the ear of our children on payment to a child molesting mulla. Next we start giving adulterated milk to our children. How can we produce a Muslim 'Ummat' We will continue producing haramkhor ganjas, murdaris kukri and showbaz sharif. Qazi and Serena Easy khota paisa. We a nation of the damned.
You must log in or register to reply here.
Share:
Facebook Twitter Reddit WhatsApp Email Share Link
Sponsored Link